Carbapenemase Challenges and Solutions in Europe

Hear from leading experts on recent challenges and solutions for carbapenemase-producing Enterobacteriaceae (CPE) in France and Italy. Scroll down to listen to brief interviews with:

One of the most feared consequences of a delayed tuberculosis (TB) diagnosis is nosocomial transmission of TB. The CDC’s guidelines to help limit the spread of this infection by keeping a patient isolated until highly infectious strains of TB can be excluded are resource intensive. For this reason, time to diagnosis carries significant weight.

They concluded that using molecular testing was associated with a significant reduction in time to isolation discontinuation and hospital discharge, as well as cost savings, compared to a conventional, microscopy-based testing strategy.

Together, these measures of impact place rapid molecular testing for TB among a select group of interventions that have been shown to advance the “quadruple aim”: improved population health, a better patient experience, a better clinician experience, and lower costs."

Chaisson LH, et al. Association of Rapid Molecular Testing With Duration of Respiratory Isolation for Patients With Possible Tuberculosis in a US Hospital. JAMA Intern Med. 2018 Aug 27; doi:10.1001/jamainternmed.2018.3638. [Epub ahead of print].

*For in vitro Diagnostic Use

Colonized patients are up to 9 times more likely to develop an SSI,1 and more than 8 out of 10 cases of S. aureus bacteremia are believed to be caused by a patient’s own flora.2,3 Knowing if a patient is colonized with MRSA or S. aureus can enable targeted infection control practices prior to surgery. However, traditional culture techniques may miss MRSA colonization in up to a third of the cases.4,5

For In Vitro Diagnostic Use.

Everly Macario has her doctorate in public health from Harvard University, but was largely unfamiliar with the threat of antimicrobial resistance until it impacted her family in a most personal, painful way. Everly’s story underscores the imperative need for rapid diagnostics in our healthcare system in order to prevent unnecessary antibiotic treatment and the dire repercussions it has on both an individual and global scale.

In order to reduce additional selection pressure in [hospital-acquired] pathogens it seems to make sense to restrict the valuable agent CHG to those indications with a clear patient benefit and to eliminate it from applications without any benefit or with a doubtful benefit."

Routine Molecular Surveillance Testing for CRE in a Low-Prevalence Setting

A study evaluating patients at high risk of being carriers of carbapenemase-producing carbapenem-resistant Enterobacteriaceae (CRE) demonstrated that routine surveillance testing may effectively guide infection control programs to limit the spread of CRE, even in low-prevalence areas.

While early detection of patients colonized with carbapenemase-producing CRE is crucial for infection control, there are no clear recommendations on when to use molecular methods for active surveillance in low-prevalence settings. This study demonstrated that a rapid molecular test is well adapted for routine surveillance testing of high-risk patients even in low-prevalence regions: It found Cepheid’s Xpert® Carba-R test to be 100% sensitive and 99.13% specific for the detection of carbapenemase-producing CRE from rectal swab samples, compared to chromogenic culture after enrichment.

The report of the findings was published in International Journal of Antimicrobial Agents.

This study demonstrated that Xpert® Carba-R is well adapted for rapid [surveillance testing] of high-risk patients even in low prevalence regions.”

Laboratories play a crucial role in identifying early active cases of Tuberculosis (TB), which is a key to eliminating the disease worldwide. In order to meet WHO’s goals for prevention of TB transmission and improvement of patient care, rapid testing of TB suspects with sensitive molecular diagnostic tests is recommended by the Global Laboratory Initiative (GLI) and experts from the European Tuberculosis Laboratory Initiative (WHO European Region). Both global expert groups recommend the use of Cepheid’s Xpert MTB/RIF as a frontline test, rather than smear microscopy or line probe assays in conjunction with culture-based methods for drug susceptibility testing.1,2

In its publication, GLI outlined a preferred algorithm for promoting universal patient access to rapid testing for TB and rifampicin resistance.1 Read more about the GLI model by clicking here. 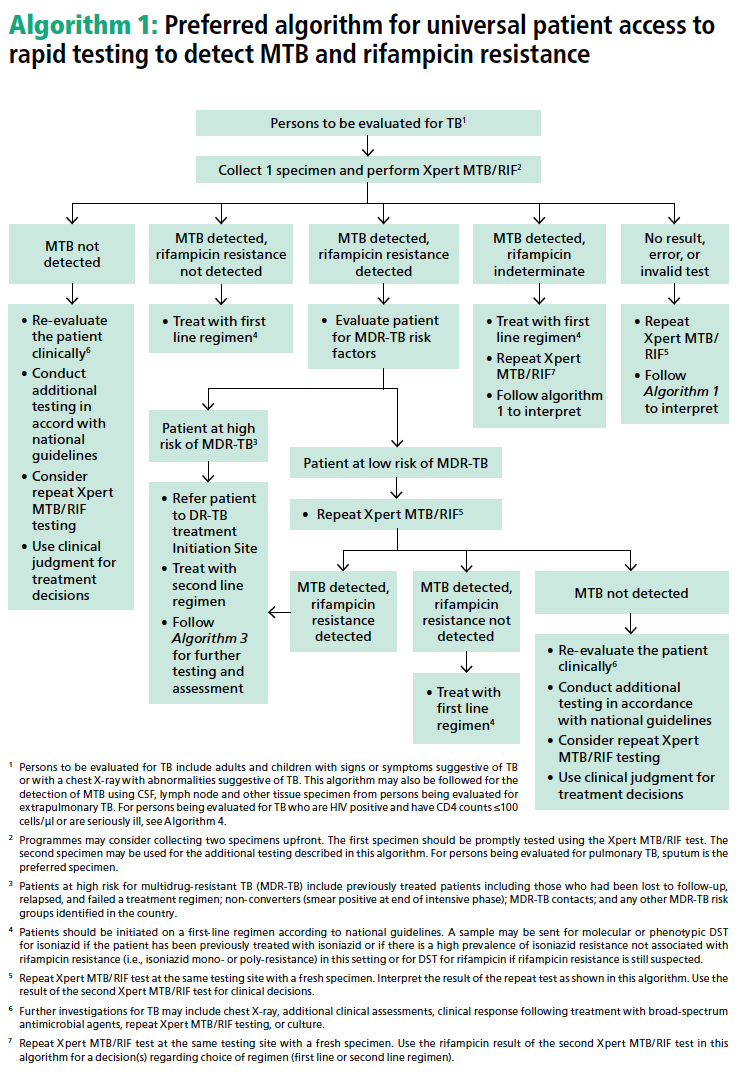 A 7-year study of the routes of nosocomial vancomycin-resistant Enterococcus (VRE) transmission in a single institute in Cambridge, United Kingdom, provides new information with important implications for hospital infection control. The study identified multiple routes of VRE introduction into the hospital followed by a complex network of organism transmission thereafter.

These findings reinforce the importance of using active screening to detect VRE carriers in conjunction with infection control measures to prevent further transmission. Active screening as part of a broader infection prevention program can reduce the rates of VRE colonization and infection, which can lead to lower rates of infection such as seen in countries that implement this strategy, such as Finland and the Netherlands.

This study used patient admission and ward movement data along with advanced whole genome sequencing methods to track introduction and transmission of multiple VRE strains. More than 50% of isolates found in the study were highly related to at least one other isolate, highlighting the complexity of VRE transmission within the hospital. Given the data, the investigators concluded that targeted infection control interventions triggered only by outbreak investigations, without active screening, would only be partially effective in reducing VRE rates.

VRE is a leading cause of healthcare-associated infections. These infections, compared with those caused by vancomycin-susceptible enterococci, have higher mortality rates and healthcare costs. Because it can often persist in hospital settings, vancomycin resistant strains of Enterococcus faecium is a particular challenge to eradicate. This challenge is compounded by a lack of active screening.

The report of their findings was published in Clinical Infectious Diseases.

Benefits of testing for S. aureus before surgery highlighted in consensus paper

The benefits of using rapid molecular diagnostic technology for pre-operative screening of MRSA/S. aureus carriers are highlighted by an international group of infection control experts in a recent consensus paper.

Surgical site infections (SSIs) are among the most common healthcare-associated infections (HAIs), and result in significant morbidity and mortality.  Nasal colonization with S. aureus is the most important independent risk factor for the development of an SSI in clean surgery, as the rate is 2 to 9 times higher in carriers than in non-carriers.

Following the 1st European S. aureus & Surgical Site Infection round table, 10 European and American experts reviewed the evidence on the value of screening for nasal carriage of S. aureus and subsequent decolonization of positive patients pre-operatively. Their findings were published as a consensus paper in the Journal of Hospital Infection. 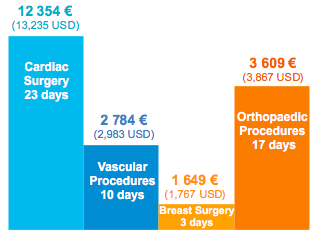 There is a clear correlation between empirical/universal use of mupirocin and antiseptic and the emergence of resistance to these agents amongst MSSA, MRSA and S. epidermidis, increasing from 60 to 95%.

An efficient solution for patients undergoing clean surgery is the utilization of rapid molecular diagnostic technology for the pre-operative identification of carriers of MSSA and MRSA, followed by mupirocin and chlorhexidine decolonization.

This treatment strategy is associated with reduced SSI rates and cost savings:

Screening and selective decolonization of patients positive for S. aureus have the benefits of preventing SSIs, helping to contain costs, monitoring changes in circulating isolates of MSSA and MRSA, and minimizing the emergence of resistance.”

The UK has been leading the way with innovative approaches to address the carbapenemase threat and limit the spread of these dangerous organisms. Scroll down to listen to short interviews with key experts in the field:

Effectiveness of MRSA Surveillance Highlighted in Update to Landmark Study

The American Journal of Infection Control published a study out of the Veterans Health Administration (VA Health System) — the largest integrated health care system in the US — highlighting its continued success reducing MRSA rates system-wide using a program centered around on-demand PCR surveillance testing.1 Over an 8-year period, the initiative is credited with reducing MRSA healthcare-associated infection (HAI) rates by: 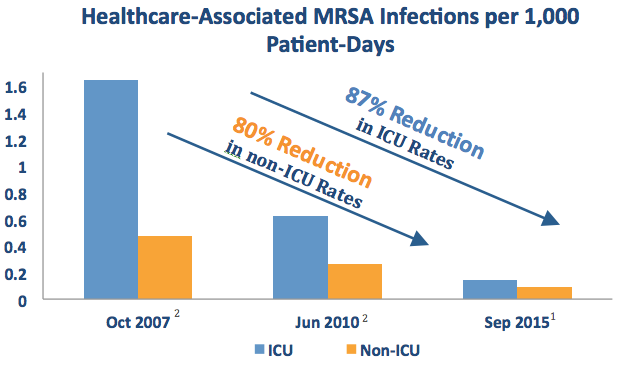 As noted in a separate publication in 2016,3 the VA also deemed this initiative to be cost effective.

The authors of the most recent article credit active surveillance testing with playing a critical role in their long-term success reducing MRSA rates:

We speculate that active surveillance was the primary driver of the downward trends seen in the VA because MRSA HAI rates had not changed before October 2007 when the Initiative was fully implemented, even though formal recommendations for hand hygiene and device-related infection control bundles had been in place for several years.”

The Role of Molecular Diagnostics in CRE Screening

At the 2016 IDWeek meeting in New Orleans, Dr. Teena Chopra delivered a presentation entitled Rapid Diagnostics in the Post Antibiotic Era: Averting a Catastrophe. Click the image above to watch a replay of the full presentation.

This video was made available with the speaker’s permission.

The US Department of Health and Human Services (HHS) recently announced new HAI reduction targets for acute care hospitals as part of its national HAI Action Plan. The announcement builds on progress made over the past few years toward goals established using a 2009 baseline. The updated targets are based on a newly established 2015 baseline and represent what the agency called “ambitious but achievable” goals.

MRSA is a common healthcare-associated infection, causing hundreds of thousands of infections globally each year. For example, as many as 375,000 MRSA infections and 23,000 related deaths occur annually in the United States alone.1 Implementation of on-demand PCR testing with Xpert MRSA followed by isolation of patients infected or colonized with MRSA has a been shown to reduce both HAI rates and infection-related costs.2

Click here to learn about the integration of on-demand molecular testing into one hospital’s MRSA Active Surveillance Program.